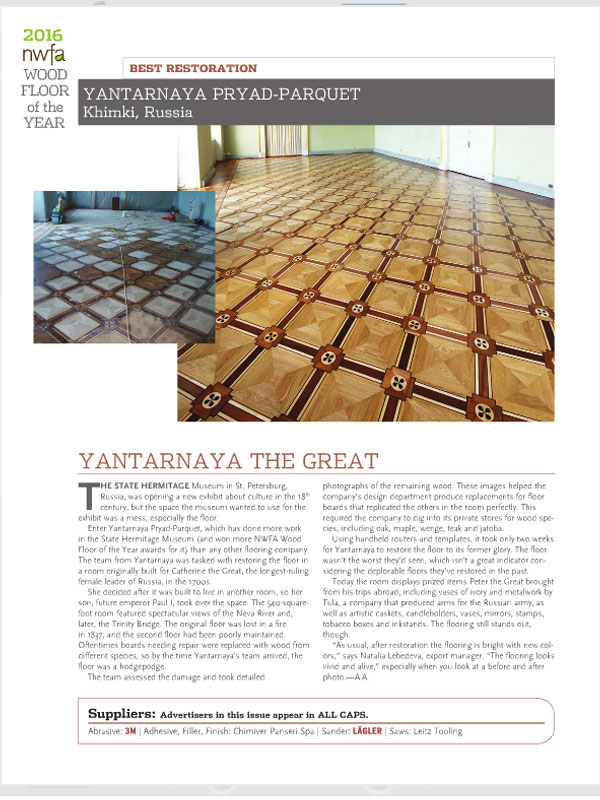 The State hermitage Museum in St. Petersburg, Russia, was opening a new exhibit abouit culture in the 18th century, but the space the museum wanted to use for the exhibit was a mess, especially the floor.

Enter yantarnaya pryd-Parquet, which has done more work in the State hermitage Museum and won more NWFA Wood Floor of the Year awards for it than any other flooring company. The team from Yantarnaya was tasked with restoring the floor in a room originally built for Catherine the Great, the longest-ruling female leader of Russia, in the 1700s.

She decided after it was built to live in another room, so her son, future emperor paul I, took over the space. The 540 square-foot room featured spectacular views of the Neva River and, later, the Trinuity Bridge. The original floor was lost in a fire in 1837, and the second floor had been poorly maintained. Oftentimes boards needing repair were replaced with wood from different species, so by the time Yantarnaya`s team arrived, the floor was a hodgepodge.

The team assessed the damage and took detailed photographs of the remaining wood. These images helped the company`s design department provide replacements for floor boards that replicated the others in the room perfectly. This required the company to dig into its private stores for wood species, including oak, maple, wenge, teak and jatoba.

Using handheld routers and templates, it took only 2 weeks for Yantarnaya to restore the floor to its former glory. The floor wasn`t the wost they`d seen, which isn`t a great indicator considering the deplorable floors the`ve restored in the past.

Today the room displays prized items Peter the Great brought from his trips abroad, including vases of ivory and metalwork by Tula, a company that produced arms for the Russian army, as well as artistic caskets, candleholders, vases, mirrors, stamps, tobacco boxes and inkstands. The flooring srill stands out, though.

"As usual, after restoration the flooring is bright with new colors," says Natalia Lebedeva, export manager. "The flooring looks vivid and alive," especially when you look at a before and after photo.