Change of flooring. «Argumenty i fakty» found out why repair work had been started in Georgievsky Hall / AIF / 13/02/2019 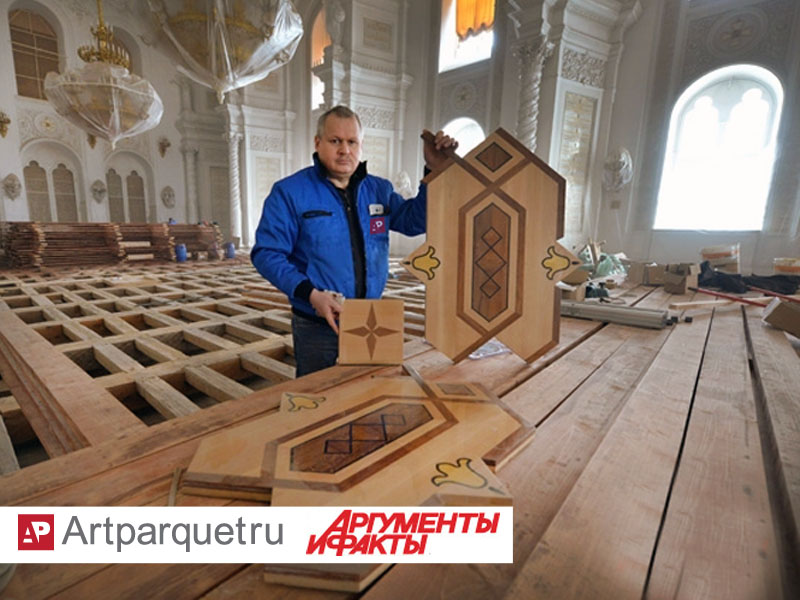 The article «Change of flooring. «Argumenty i fakty» found out why repair work had been started in Georgievsky Hall». Parquet secrets of the Kremlin were unraveled by Mars Basyrov, engineer of our company.

The Grand kremlin Palace celebrates its 170th anniversary this year. How one of the most recognisable halls of the Palace, Georgievsky Hall, is getting prepared for it?

The news writer of «Argumenty i fakty» was the only person who was allowed to learn all the secrets.

Despite the fact that tourists are warned that Georgievsky Hall is closed for reconstruction, many of the tourists complain that they will not see the most important thing. Besides why the hall needs reconstruction? Was not it built for a full due? And what is going there after all? The staff of the Grand Kremlin Palace considered our request and let us enter the holy of holies.

However, I did not get into the hall at once. My attempt to burst into the hall was prevented by the question of Anastasia Pavlova, senior research assistant of the Grand Kremlin Palace: «What do you intend to see there?» Well, famous sculptures depicting our most glorious victories, glittering chandeliers, shining parquet flooring...

«The chandeliers are draped with a protective cloth. Sculptures are where they should be of course. But it is not the right time to examine them. They are situated high, and now it is better to watch your step because there is no parquet flooring there, and you run the risk to break your legs...» 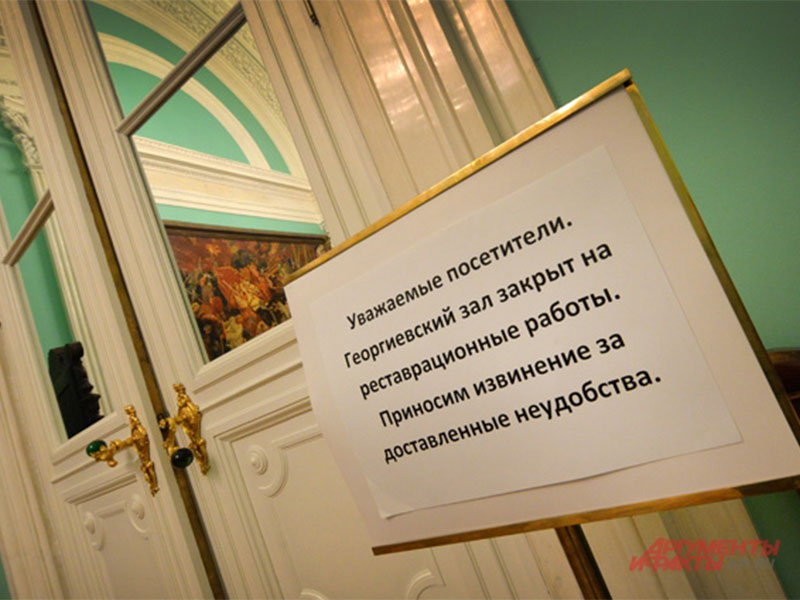 It turned out that parquet flooring dating back to Nicholas I had been removed and would be partially substituted. So, it is possible to see the original historical parquet flooring only in the anteroom from where it is supposed to start acquaintance with the Palace. It was improper to rush into the hall immediately after climbing the stairs. That is why the anteroom was the place where it was possible to recover one's breath, look around and have a talk. 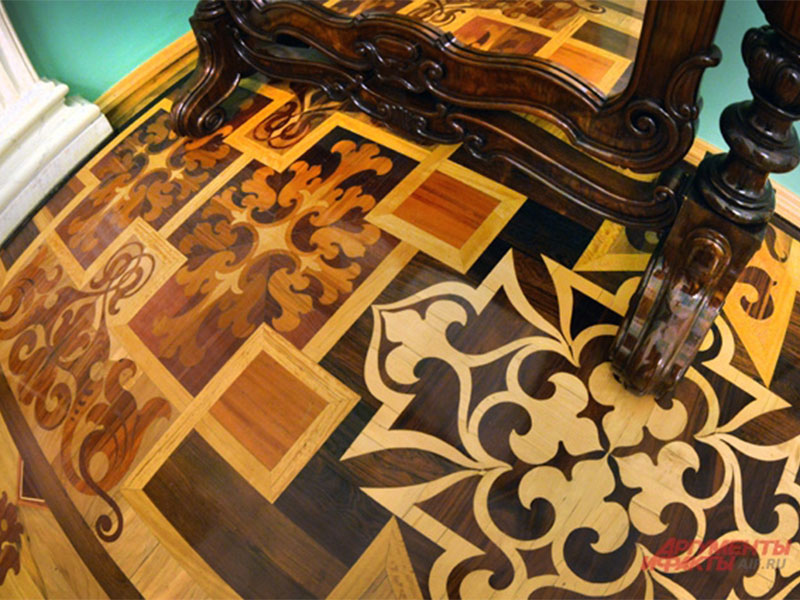 No doubt it would have been a sin to miss the opportunity to examine the very parquet flooring that had been installed back then. So, I started walking with a stoop following the windings of wooden planks that perfectly matched each other. The design was really intricate. Wait a minute... What's that?

By the wall there was a small trade mark made of smaller planks. It was written on it in French that this parquet flooring was made at the factory of George Muller Jr in 1845. But it means that the palace cannot be 170 years old. It must be older. Is there any mistake? 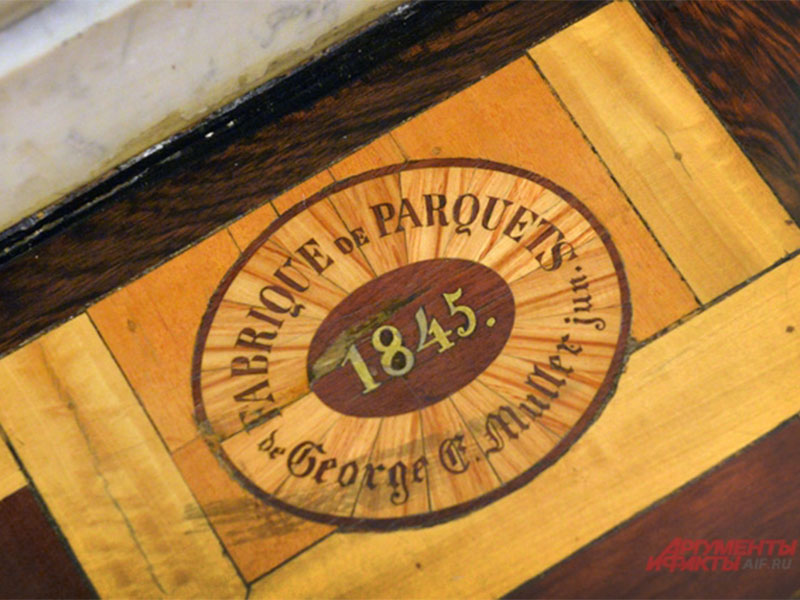 «It took 11 years to buid the palace. It was finished and consecrated at Easter on April 3 in 1849. However, all the furnishings were made in advance, including parquet flooring. Despite the French inscription and the German surname the factory was Russian, based in St. Petersburg. The palace should have been built by local architects, artists and craftsmen. First it was a matter of reputation for the emperor. Second it was a matter of money. The monarch was cautious with money and tried not to throw it about. Unfortunately it was impossible to use only local materials. For example, some wood species for parquet flooring were bought abroad because we don't have such wood in Russia».

Not only they don't grow in Russia, but even their names differ from the modern ones. For instance, very dark, beautiful and extremely expensive ebony wood was called Kaki that sounds funny to the Russian ear. 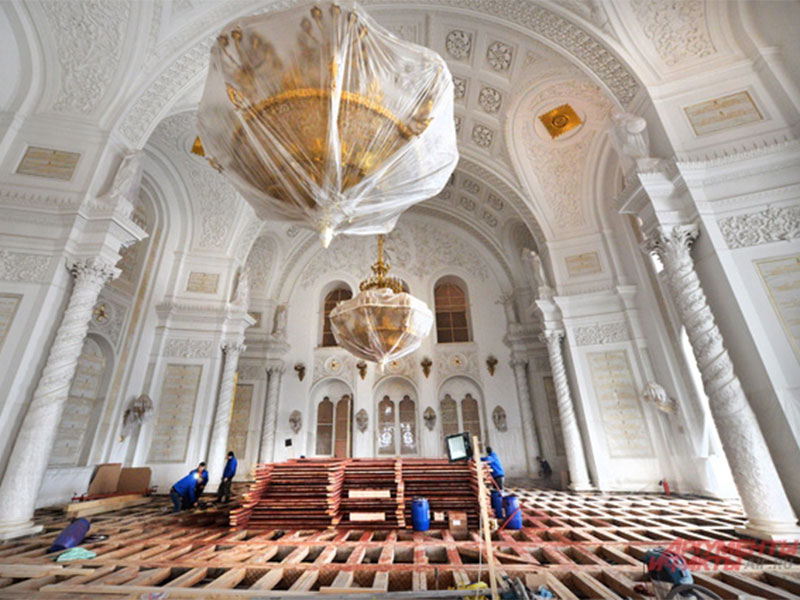 Meanwhile from behind the secret doors one could hear the terrible noise such as groaning, roar and screech of machines. But now this noise stirred wonder and interest. What is there finally?

I opened the doors and grasped why the advise was to watch the step. There was really no flooring. Instead of it there were crossed wooden beams. Half a metre below them there was a brick slab. Right at the entrance there was a big pile of boards. The workers picked up some of them and delivered to the far end of the hall. Beams looked as if they were made of ebony or rosewood, but they turned to be quite ordinary. But engineere Mars Basyrov explained that everything was not as easy as it seemed to be. 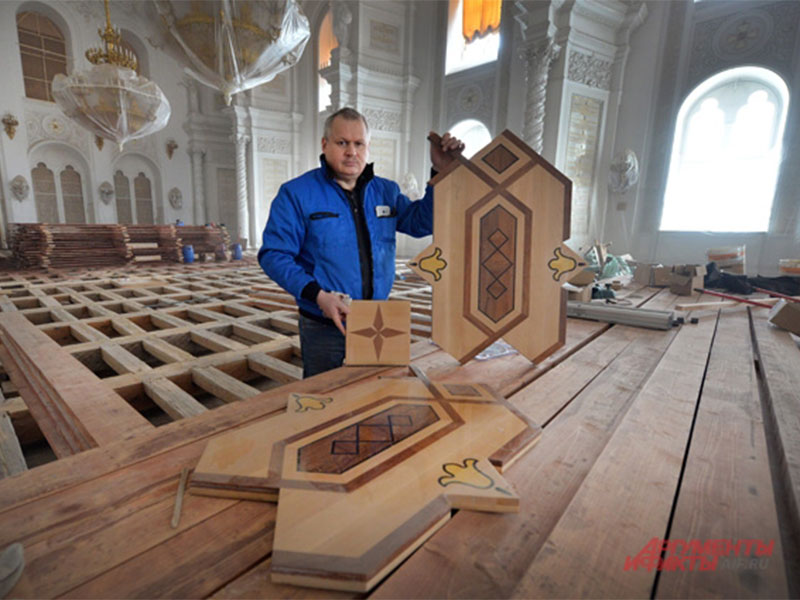 «Just for you to know the beams that we are standing on are dating back to Nicholas I. The so called "quite ordinary" beams are 180 years old! Probably even more. Even then many of them were not new. It was a common thing to dismantle old buildings and to use them in the palace for costs reasons. Nicholas I was a cost-conscious person and held a degree in engineering. He understood that this pine is good, that it would serve for many years. When we dismantled the old flooring we found only a couple of places damaged by humidity: in one place there was entrance from the gallery and in the other place there must have been a plant».

Looking around the beams I doubted Mars's words. There was a bright spot of beams. And they were new for sure. So, what was that? 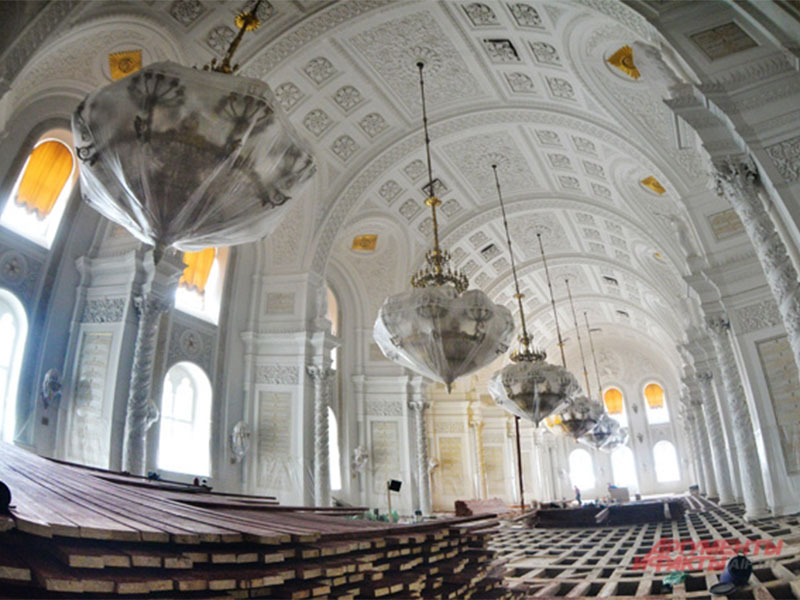 In return I was shown a copy of document the heading of which could strike many with horror: «To comrade Beria, the People's Commissar for Internal Affairs of the USSR. SPECIAL REPORT». However, there was a happy end like in a fairy-tale: «Dropped bombs did not do any damage». In the middle of the report there was a message directly related to those new beams: «July 22, 1941, a high-explosive bomb filled with ammonal and weighting 250 kg hit the roof in the Grand Kremlin Palace, in Georgievsky Hall. The bomb didn't explode. It reached the flooring of the hall and fell apart forming shapless crater».

In 1941 the workers made a very decent repair. So, the contemporary craftsmen had one task - to preserve everything as it was. They needed just to clean beam channels, apply primer and strengthen floor slab with new beams.

But where is the new parquet flooring itself? Here are piles of boards that are used for foundation. Plywood is also there. It will be then installed on boards. And where are the precious rosewood and other 23 wood species?

«The whole volume of parquet flooring (1250 sqm) is not yet here. But I can show you some planks. Here they are, near the installation scheme», said Mars Basyrov.

The planks were very beautiful, but I was amazed by the hall's dimensions. It is not easy to install flooring in a small room. And here there is a huge hall with the design that occupies the whole area! 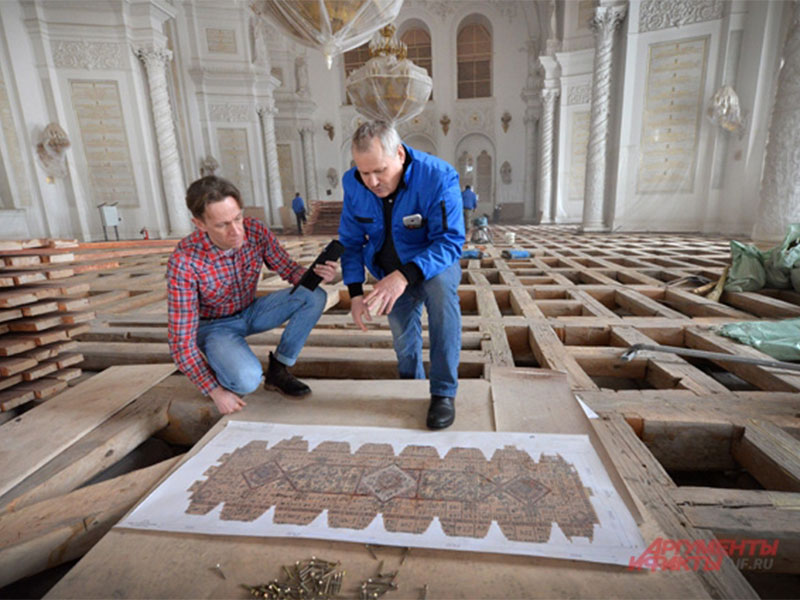 «It is not possible to trust inexperienced installers to install such difficult parquet flooring. A tiny mistake can lead to terrible consequences. The installer should calculate everything in advance. He should know from the start how the flooring would look like. This is not the first time we work in the Kremlin. We have also changed parquet flooring in the Faceted Chamber by the way. Parquet flooring needs renewal because it wears out from walking, cleaning, and sanding of course. Wear layer of the old parquet flooring has become minimal, it has lost its quality and started to get down. So, it should be chenged for sure...» 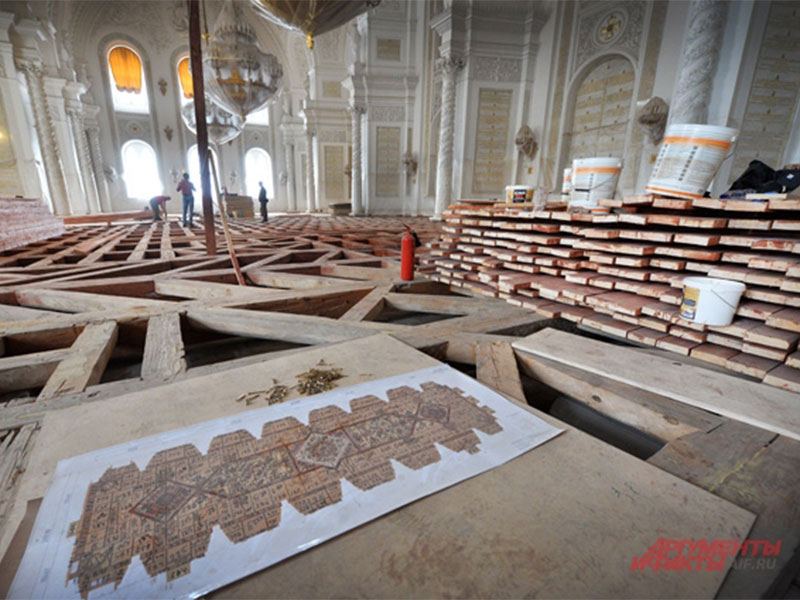 I have barely left the hall, and the machines started working with renewed vigour. And I was looking at the flooring under my feet, and here I started to doubt. Because I saw old historical parquet flooring that was dark in some places, in some places mahogany colour and even light. But still it was not as light as I had just seen. What is that supposed to mean?

«First of all wood changes its colour by itself, it gets darker» said Anastasiya Pavlova. «Secondly old flooring was lacquered several times. You know when we dismantled the flooring and took off the layers of lacquer it turned out that the colour of flooring was exactly milk white. And flooring matched the whole decoration of Georgievsky Hall. Now we recreate the same original colour and appearance of parquet flooring dating back to Nicholas I. I wouldn't beleive it if I haven't seen this with my own eyes!»

Perhaps me too. Well, there are many things difficult to believe. For example, that air bomb would not explode. But this is a historical fact. Very soon the new parquet flooring of Georgievsky Hall will also become a historical fact.