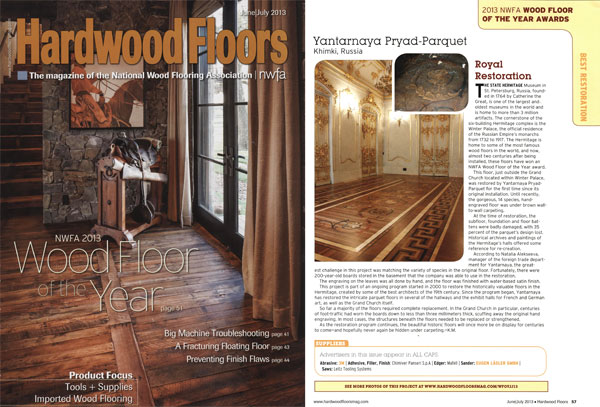 The State hermitage Museum in St. Petersburg, Russia, founded in 1764 by Catherine the Great, is one of the oldest museums in the world and is home to more than 3 million artifats. The cornerstone of the six-building Hermitage complex is the Winter Palace, the official residence of the Russian Empire`s monarchs from 1732 to 1917. The Hermitage is home to some of the most famous wood floors in the world, and now, almost two centuries after being installed, these floors have won an NWFA Wood Floor of the Year award.

At that time of restoration, the subloor, foundation and floor batens were badly damaged, with 35 percent of the parquet`s design lost. Historical archives and paintings of the Hermitage`s halls offered some reference for re-creationh.

According to Natalia Alekseeva, manager of the forein department of Yantarnaya, the greatest challenge in this project was matching the variety of species in the original floorс. Fortunately, there were 200-year-old boards stored in the basement that the company was able to use in the restoration. The engraving on the leaves was all done by hand, and the floor was finished with water-based satin finish.

This ptoject is part of an ongoing program started in 2000 to restore the historically valuable floors in the Hermitage, created by some of the best architects of the 19th century. Since the program began, Yantarnaya has restored the intricate parquet floors in several of the hallways and the exhibit halls for French and German art, as well as the Grand Church itself.

So far a majority of the floors required complete replacement. in the Grand Church in particular, centuries of foot-traffic had worn the boards down to less than three millimeters thick, scuffing away the original hand engraving. in most case, the structures beneath the floors needed to be replaced or strengthened.