Residence of the President, Republic of Tajikistan. 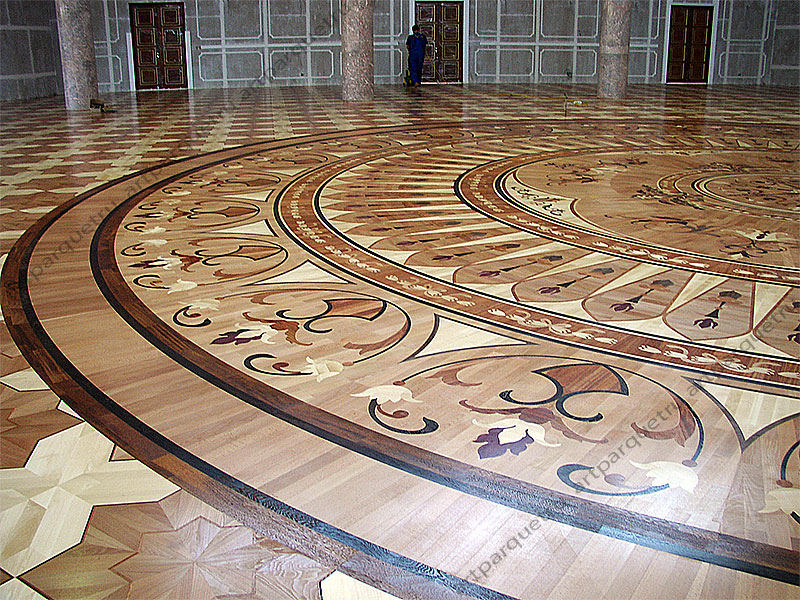 "3 000 sqm of palace parquet in a month and a half. Just do it!" - so was the appeal, and now the teams of all groups of the company "yantarnaya Pryad-Parquet" are at work. It's about the task of high complexity, which impresses deeply by  degree of responsibility. It was necessary to work out the project, and then produce and install artistic parquet (namely 2760 sqm) in the Reception House of the President of the Republic of Tajikistan: the Banquet Hall, the Conference Hall, the Treaty Signing Area, the President's Private Room, the Congress Hall and the Hall with the oval table.

Two sites were completed in a very short time. The sketch of the floor was developed in just four days! All this required high tension, professionalism and special creativity of thinking from the team of the Yantarnaya Pryad-Parquet`s design studio. Taking into account all the wishes of the customer, the design was developed in an Oriental style. General interiors of the residence of the President of the Republic of Tajikistan, the House of Reception and parquet floors should reflect all the traditional details ​​of the Eastern society, while emphasizing the uniqueness of the ancient culture with the means of modern art. This is not an exhibition or an exposition, everything should be real, but solemn and majestic. The color of this interior suggests contrasting color combinations and warm colors. And here is the project, which includes

sketches and working drawings; it is signed, but tere are only two months allocated for manufacturing and installation.

The decoration is dominated by red, terracotta, yellow, sandy and orange colors in combination with subdued shades of purple, brown and green, and the rich tones of parquet planks from merbau, amaranth, wenge and walnut, which give the rooms a grand look. When manufacturing only the central medallion of the Banquet Hall (the area of which is 132 m2), consisting of a huge number of elements, were used more than 10 different types of wood species.

The works are finished, the acts are signed, the instruments are in cases, a lot of activity at the government level is already boiling in the Signing Hall, meetings and receptions are held, the Banquet Hall receives guests, the Oval Office is running according to the schedule. The eastern expedition of the yantarnaya Pryd-Parquet is over, the eastern theme of the Asian landscape with clear blue water and snow caps of the mountains continues now in the new works of the design studio, but about this in the next issues of the magazine.