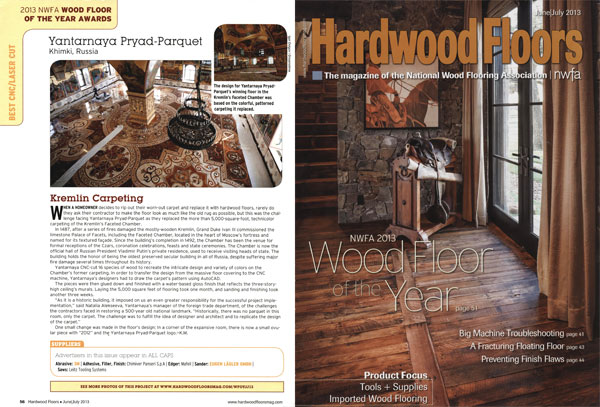 In 1487, after a series of fires damaged the mostly-wooden Kremlin, Grand Duke III commissioned the limestone Place of Facets, including the Faceted Chamber, located in the heart of Moscow`s fortress and named for its textured facade. Since the building`s completion in 1492, the Chamber has been the venue for formal reception of the Czars, coronation celebrations, feasts and state ceremonies. The Chamber is now the official hall of Russian President Vladimir Putin`s private residence, used to receive visiting heads of state.

Yantarnaya CNC-cut 16 species of wood to create the intricate design and variety of colors on the Chambers`s former carpeting. Laying of 5,000 square feetof flooring took one month, and sanding and finishing took another three weeks.

"As it is a historic building, it imposed on us to an even greater responsibility for the successful project implementation," said Natalia Alekseeva, Yantarnaya`s manager for the foreign trade department, of the challenges the contractors faced in restoring a 500-yqer old national landmark. "Historically, there was no parquet in this room,  only the carpet. The challenge was to fullfill the idea of designer and to replicate the design of the carpet."

One small change was made in the floor`s design: In a corer of the expansive room, there is now a small ovular piece with "2012" and the yantarnaya Pryad-Parquet logo.