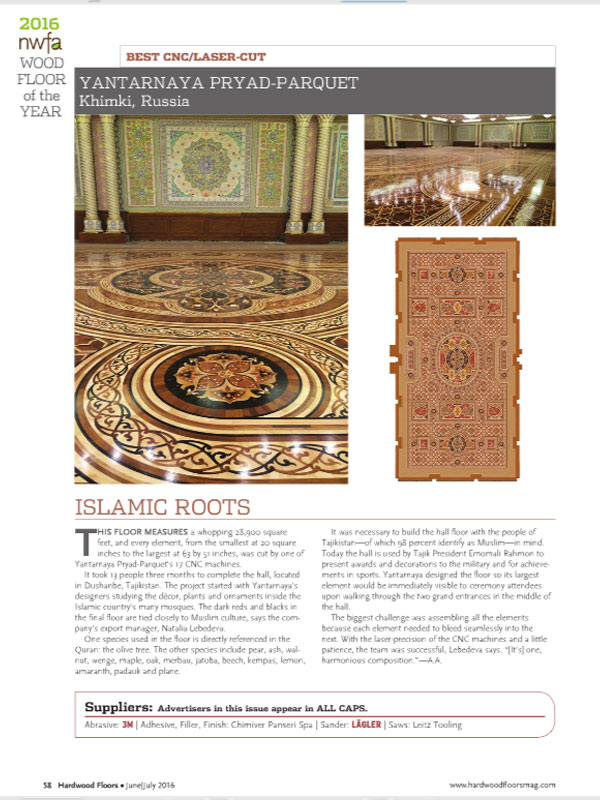 This floor measures a whopping 28.900 square feet, and every element, from the smallest at 50 square inches to the largest at 63 by 51 inches, was out by one of Yantarnaya Pryad-Parquet`s 17 CNC machines.

It took 13 people three months to complete the hall, located in Dushanbe, Tajikistan. The project started with Yantarnaya`s designers studying the decor, plants and ornaments inside the Islamic country`s mainly mosques. The dark reds and blacks in the final floor are tied closely to Muslim culture, says the company`s export manager, Natalia Lebedeva.

One species used in the floor is directly referenced in the Qurar the olive tree. The other species include pear, ash, walnut, wenge, maple, oak, merbau, jatoba, beech, kempas, lemon, amaranth, padauk and plane.

It was necessary to build the hall floor with the people of Tajikistan—of which 98 percent identify as Muslim—in mind. Today the hall is used by Tajik President Emomali Rahmon to present inwards ans decorations to the military and for achievements in sports. Yantarnaya designed the floor so its largest element would be immediately visible to ceremony attendees upon walking through the two grand entrances in the middle of the hall.

The biggest challenge was assembling all the elements because each element needed to bleed seamlessly into the next. With the laser-precision of the CNC machines and a little  patience, the team was successful, Lebedeva says.