Georgievsky hall is closed for restoration of parquet flooring dating back to Nicholas I. /TASS/ 28.11.2018 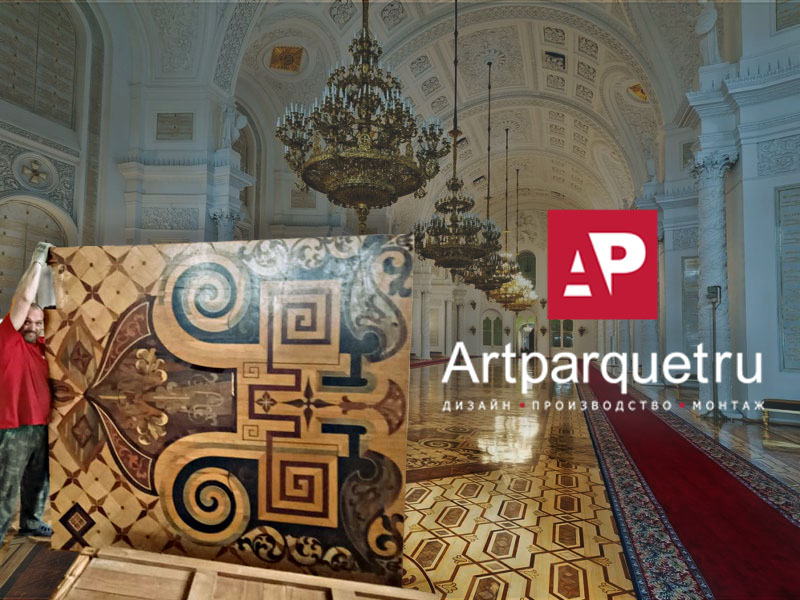 More about the project

Sergey Devyatov, official representative of the Federal Protective Service, pointed out that a 170-year old parquet flooring had been made of more than 20 different wood species.

The imperial parquet flooring of Georgievsky Hall will be replaced by its exact copy. The works will start in near future, however the hall is already closed for restoration, said Sergey Devyatov.

"Unique mosaic parquet was installed in 1848 and served 170 years. The research has shown that the planks were extremely thin. And in some places the thickness of planks was just 1-1.5 mm" said Devyatov. Therefore the question of complex flooring restoration came up. The official representative of the Federal Protective Service emphasised that the specialists "carried out thorough scientific and artisitc research of parquet, installation schemes were made in the digital form, the future work has been agrred on, the dismantling of the old parquet and the installation of new one will strat soon".

Parquet that survived the bombardment

Georgievsky Hall is the biggest hall of the Grand Kremlin Palace. Its length is 61 metres, the width is 20.5 metres. This hall was named for the Order of St. George. The hall was used for official ceremonies in Imperial Russia and the USSR. Today it is used for the ceremonies with the participation of the Russian President.

Parquet flooring in Georgievsky Hall was created according to the drawings of the academician Fedor Solntsev. It was made of more than 20 natural and toned wood species. There were used such wood species as oak, beech, ash, walnut, Indian rosewood, African padouk, sycamore.

According to Devyatov a complicated technology for flooring installation was used because it was necessary to close the arched ceiling of the ground floor of the Palace. At first workers used huge hewn logs for levelling. They based on the arch apex and on special niches in the walls. Wooden beams were inserted in their grooves diagonally. Then wooden panels were installed, they served as foundation for parquet flooring.

The representative of the Federal Protective Service reminded that in the end of 1990s large restoration was made in two other halls of the Grand Kremlin Palace - Andreyevsky Hall and Aleksandrovsky Hall. During the Soviet rule these two halls were united in one for holding party conventions and sessions of the Supreme Soviet of the USSR. The restoration was also made in Georgievsky Hall then, but the flooring was just renewed.

However, one fragment of Georgievsky Hall needed serious reconstruction. "During the Great Patriotic War a 250-kg German bomb hit the roof of the Grand Kremlin Palace and got stuck in the forth pillar of the Hall. Part of parquet flooring, foundation and floor beams were destroyed. Fortunately the bobm did not exploded, and the damage was repaired fast" emphasized Devyatov. He specified that the parquet flooring destroyed by the bomb was the only lost fragment of the original parquet flooring.

"At present parquet flooring is in terrible condition, its further preservance and maintenance in due form is impossible. That is why it was decided to make scientific restoration and reconstruction" stated the representative of the Federal Protective Service.

He assured that the workers would follow the same technologies as did the workers nearly two centuries ago. "It is not decided yet what to do with the logs that make foundation. If they are still strong, there will be no necessity to change them" said Devyatov.

The historian thinks that for installers it will be easier to work in Georgievsky Hall than it was in Aleksandrovsky and Andreyevsky Halls. Back then the restorers had to reconstruct parquet flooring according to drawings and the remained photos of fragments of flooring. Now the original flooring is at restorers' full disposal.

"Time of completion of work is not determined yet because the process will be complicated and it is hard to forecast it" said Devyatov. He added that only flooring will be restored in Georgievsky Hall. Neither ceiling, nor walls need renovation.

News item about start of parquet work in Georgievsky Hall