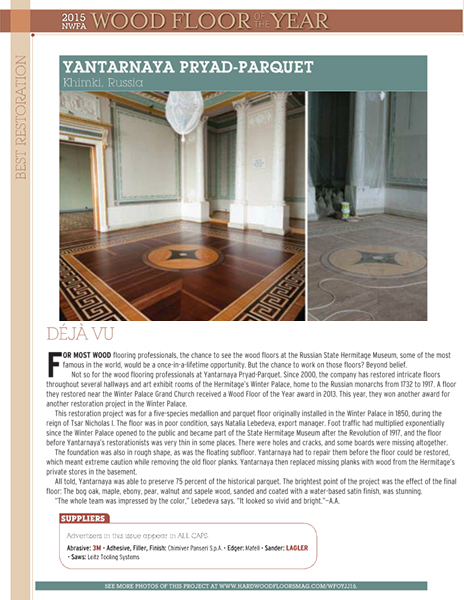 For most wood flooring professionals, the chance to see the wood floors at the Russian State Hermitage Museum, some of the most famous in the world, would be a once-in-a-lifetime opportunity. But the chanceto work on these floors? Beyond belief.

Not so for the wood flooring professionals at Yantarnaya Pryad-Parquet. Since 2000, the company has restored intricate floors throughout several hallways and art exhibit rooms of the Hermitage’s Winter Palace, home to the Russian monarchs from 1732 to 1917. A floor they restored near the Winter Palace Grand Church received a Wood Floor of the Year award in 2013. This year, they won another award for another restoration project in the Winter Palace.


This restoration project was for a five-species medallion and parquet floor originally installed in the Winter Palace in 1850, during the reign of Tsar Nicholas I. The floor was in poor condition, says Natalia Lebedeva, export manager. Foot traffic had multiplied exponentially since the Winter Palace opened to the public and became part of the State Hermitage Museum after the Revolution of 1917, and the floor before Yantarnaya’s restorationists was very thin in some places. There were holes and cracks, and some boards were missing altogether.


The foundation was also in rough shape, as was the floating subfloor. Yantarnaya had to repair them before the floor could be restored, which meant extreme caution while removing the old floor planks. Yantarnaya then replaced missing planks with wood from the Hermitage’s private stores in the basement.


All told, Yantarnaya was able to preserve 75 percent of the historical parquet. The brightest point of the project was the effect of the final floor: The bog oak, maple, ebony, pear, walnut and sapele wood, sanded and coated with a water-based satin finish, was stunning.


“The whole team was impressed by the color,” Lebedeva says. “It looked so vivid and bright.”—A.A.